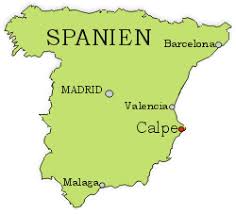 Dominated by the impressive rock Peñón de Ifach, Calpe extends in a landscape of mountain peaks and vineyards on the shores of the Mediterranean. Located in the area of ​​Marina Alta, in the province of Alicante, this town has been inhabited by various civilizations in the past, some of which have survived. Their deep-rooted traditions are in keeping with the excellent tourist offer of the city, making it one of the most important tourist destinations on the Costa Blanca. Its 11 kilometers long beach with its bays, its sports harbor and the scenic beauty of the surroundings make this city particularly attractive. Not to forget, of course, is their gastronomy, a veritable showcase of the judicial variety of the province of Alicante.

…a city with a long history and deep-rooted traditions, is one of the most popular tourist destinations on the Costa Blanca. You will be particularly attracted by its sports harbor, the beach promenade and an 11 km long coastline with steep cliffs, beaches and small bays.

One of the landmarks of the city is the Peñón de Ifach, an immense, 332 m high limestone mass, which protrudes into the sea and was the cradle of the city. The area of ​​the Peñón de Ifach was declared a Natural Park because of its large variety of animals and plants. The best view of Calpe and the surrounding coast can be enjoyed from its summit, which can be reached by guided walks through the natural park.

The pleasant climate, together with the natural beauty of the surroundings make this municipality in the province of Alicante a perfect destination for all visitors: from those looking for sun and beach to those who want to do sports in the open air. Takeaways and rental of sports equipment, such as Surfboards or jet skis alternate along the La Fossa and Arenal beaches, two sun-drenched beaches with beautiful promenade and all kinds of service facilities. Among the quiet coves of the coast, Les Bassetes deserve special mention for their biodiversity-rich seabed and crystal clear sea Water is known.

Also beautiful are the coves of La Manzanera and Les Urques, which are ideal for scuba diving or boating. Lovers of other outdoor sports have the opportunity to climb the Peñón de Ifach and explore the caves of the Barranc del Mascarat or Monte Oltá.History and ArchitectureCalpe has been populated throughout history by various peoples of the Mediterranean. Iberians, Phoenicians and Romans found there a perfect enclave, which, thanks to the Peñón de Ifach, served as an outstanding watch and vantage point over the coast.

The present-day town of Calpe was created around the Peñón, as evidenced by numerous remnants in the area, such as. The Baths of the Queen, a picking factory from Roman times, becomes clear.

The old town center of Calpe is bordered by the old city walls, which were built in the 15th century to defend the city against pirate attacks. In addition to the Moorish district of Arrabal, with a few sections of the wall and the fortress tower of La Peça, part of the medieval city walls has been preserved. Nearby rises the parish church, built in the 15th century in honor of the Virgen de las Nieves. It is the only Gothic-Mudéjar-style sacral building in the Valencian autonomous region. Other beautiful examples of sacral architecture in Calpe include: the pilgrimage chapels of La Cometa and San Salvador, both from the 17th century.

The surroundings of the city are characterized by rural character. Vineyards alternate with beautiful examples of local architecture, e.g. Casa Nova, a typical farmhouse that gives the impression of being a fortress, or the Pou Salat, a building from which the town used to be supplied with drinking water.

Gastronomy, festivals and surroundings Calpe’s traditional cuisine is based mainly on rice and fish. In addition to the famous Arròs del Senyoret you can also taste other rice dishes there, e.g. Rice with beans and beets, with chard or baked. Typical dishes include the so-called Puchero de Pulpo (octopus stew) and Llauna de Calpe (fish dish). Denominación de Origen wines taste best with any of these delicacies. As in most towns and villages in the province of Alicante, Calpe hosts a variety of festivals and leisure activities throughout the year. From Carnival to the Fallas de San José (19 March), to the St. John’s Fire (24 June) and the Fiesta de Moros y Cristianos (Moors and Christians Festival) in October. The festival in honor of the patron saint of the city, the Virgen de las Nieves, is celebrated on the 5th of August.

From Calpe there are excursions to a variety of other places on the Costa Blancaan. North of Cape Nao are Denia and Jávea, two tourist towns with long beaches and beautiful bays. The excursion continues in the Montgó Natural Park, where the mountains reach the sea and form beautiful cliffs.

Northwards you will find Teulada, famous for its cultivation of Muscatel grapes, Altea, where especially the blue dome of the Virgen del Consuelo stands out, L’Alfàs del Pi, a town nestled against the Mediterranean Sea with its beach Albir, and Benidorm with its beautiful beaches, making it one of the most popular tourist destinations in the province of Alicante.

This curious place, which already existed in Roman times, is an important natural landscape and serves numerous migratory birds as a resting place.

It is a pleasure to observe the various species such as the flamingos with their typical pink plumage during a walk.

The lagoon is located in the municipality of Calpe and was created by the operation of former salt marshes, probably from the Roman period. They are located near the nature reserve Peñón de Ifach.

The area is unique in terms of both culture and nature, with a large number of migratory birds with up to 173 registered species being harbored several times a year in the area. The colony of the pink flamingos stands out because of its characteristic colors.

The humid climate is partly due to the proximity and the location of the Peñón de Ifach. This moisture favored the formation of a lovely lagoon of volcanic origin, which is held back by a double sandwall. Excavations have found in these sandbanks the former ponds of a fish farm, Roman remains known as Baños de la Reina.

A footpath leads through the wetland, along the avenues „Avenidas Ejércitos Españoles“ and Juan Carlos I. On the way we enjoy a beautiful view of the nature reserve with its characteristic fauna and flora.